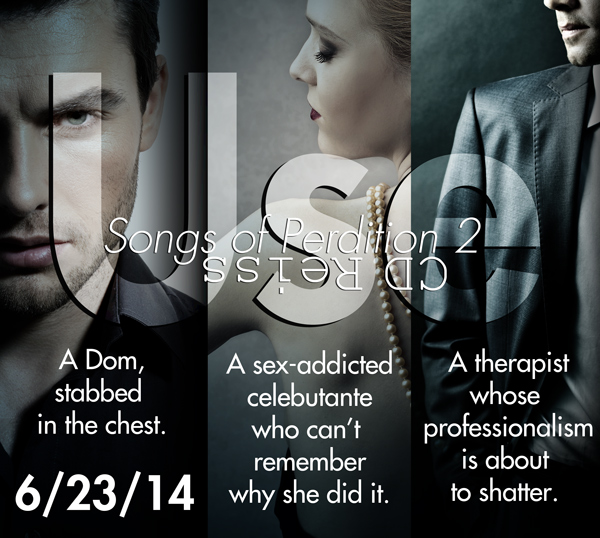 Typically, I'd write this into a Facebook post, but thanks to Christy Wilson's fabulous web management, I'm more inclined to just blog this shit.

So, what IS the word?

I'm still getting over 2013, and here's 2014, all over my lap. Is it Friday night already? In JUNE? And I still haven't fully coped emotionally with what the Songs of Submission meant to me as an artist. I'm all clear on what it's done for my family, and for my business, and how I spend my days. But as an artist, I'm still growing.

Last year I wrote a serial on a whim, and chased seven installments across 2013, from January to October in a breathless run to the finish. I thought about nothing else, except to consider my mysteries as I was writing Beg and Tease (was I cheating on Laura and Jeremy? Would I ever be complete without finishing their story?)

Over the course of 2013, I found lots of fans who wanted a full length series from me, and I was more than happy to oblige after Jonathan and Monica were done, so I began Songs of Corruption.

I cannot begin to describe the struggle.

One, because it was full length. I didn't expect it, and I never coped with it. I'd written four full length (published) novels before Spin, so I figured, you know…just do it again. Right?

Sure, but in 2013, I did serials under 50K, which (and I can't stress this enough) they were structured like serials. It wasn't so much the length, as the actual tension structure that threw my ass off. And now, with Spin I needed to do it in three acts? Hot fuck, really? That should be easy. Right? Why did I spend fifty grand on film school if I can't put together three acts?

I did it, but I threw away 125K words of episodic structure or bad three act plot nonsense first.

And part of the struggle was the fact that Jonathan and Monica had already eaten away a big part of my heart, and I hadn't given myself any time to heal from finishing with them.

Make no mistake, when an author finishes an epic series, a part of their hearts are broken. I know that doesn't seem to fit with my “all business” attitude, but trust me, an author needs to take a break after. Everything sounds like the old characters, scenes come unbidden, possibilities open, missed opportunities reveal themselves, the completed characters walk into the room and speak when they shouldn't.

And so while I wrestled with the structure of Spin, I was hurting from Jonathan and Monica, who are bossy and bitchy to begin with.

I finished Spin absolutely wrecked. I put more into that book than I'd ever put into anything in my life, and I'm damn proud of it, but I was drained. So I put together Fiona's story as kind of a palette cleanser where I could just go batshit and do what I wanted, and if everyone hated it, no harm no foul. It was part of an anthology.

But so, people liked Fiona's story (god bless the lot of you – I love her) and because it's serialized, I enjoyed WRITING it.

I'm getting to the point.

Again I didn't take a break. I plowed right into Use, which I LOVE and can't wait for you to read, and right in the middle of that, the opening of Antonio and Theresa's book came to me. Not just a scene, or whatever, but the emotional place these two were finding themselves in. This is glorious. A gift from the universe. A direct communication from the holy spirit, if you fly that way. I feel like I can write it now, where before I was such a fucking wreck, I couldn't.

So, let me get to my real live plans.

1) I'm starting Spin 2 in a couple of weeks. It may become serialized. Like I said, I tried to make it a nice neat 3 full-length book trilogy. It may work out that way, but I'm sorry. I can't make a commitment on that. If it does turn into a serial, I'll let you know, and you can expect a September release instead of November.

2) Use ends sequence one of Songs of Perdition. So, yes, there will be a wait for book 3 of SOP. I'm sorry, but Use isn't a really bad cliffhanger, as they go, just a little open ended.

Use will be available everywhere on 6/23.

A note on how I release serials:

For the time being, when I release a serial it is 99c the first 24 hours after the mailing list notice goes out (you can get on the mailing list by clicking the tab above) and then it goes to full price. So get on that list, and if you have gmail make sure to check your promotions tab. In this way, loyal fans get a discount without me having to put stuff on sale.

Thanks for your time, Goddesses, Contessas and kittens.
(and Kings, Capos, and Masters)

Here are some links…

SPIN (book one in Songs of Corruption)

KICK  (book one in Songs of Perdition)