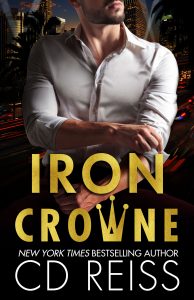 Byron Crowne is a charming liar and a gorgeous monster.

I detest him.
I can't resist him.
He’s awakened desires I didn’t know I had.
When he touches me, I need to fight him . . . and I need him to win.
Our one night stand bruises my skin and leaves dents in the walls, but the sheets aren't the only thing we shred that night.
And suddenly, the stakes are higher than ever.

Olivia Monroe lights a fire in me that died a long time ago.

I’m a different man when I’m with her. I need to own her, take her, mark her as mine.
Everything changes when she might be pregnant and for the first time in my life…I’m powerless against this stubborn, untamable woman.
She’s the one in control and I have an impossible job:
Prove I’m worthy to be a father.

I slapped his accusing finger away. “Take a fucking hint, Byron.”

His face was like a movie screen replaying every moment of our nights together. Every slap on my ass and every tug on my hair. He was remembering the moments he’d owned me and comparing them to the tricked and disgraced woman standing in front of him.

“Yeah. What are you going to do about it?

“You have five seconds to turn your ass around and get back in that car.”

This fucker was the worst human being I had ever met, and though my mind was defiant, my body was turning white-hot and pliable under his gaze. “Or what?”

“Or you’re getting what you came here for.”

“Oh, you mean you think we’re going to fuck?”

He saw it. He saw it all. He read my horror and my arousal. My dare and my fear. It all said yes. I was a Rosetta stone of emotional languages.

“What?” I tried to confirm, but he’d said all he was going to.

His pecs were twitching, and his neck was tight. He was a coil of pent-up rage twisted around a shaft of potential ecstasy. He was angry bones and hungry flesh. “Three. Drive away, Olivia.”

He was all those things, and I was the uncomfortable, twisting hand that tightened the coil. I was the constricting tendons pulling anger and lust together. I didn’t wonder why I wanted him or whether it was good for me. I just did.

“Do it.” My lips moved, but my voice failed.

We stared each other down. I’d come to tell him I knew he’d betrayed me, and his actions were over the line. I never wanted to see him again. He was wrong for me. Wrong in spirit and mind. He was everything I hated. I was going to say all those things and yet…

“Did you forget how to count?” I challenged him.

My hips were made of raw, molten heat. When his lips moved, my knees went weak with anticipation.