First off… GET FORBIDDEN HERE

You all are so patient. I just beat the hell out of you guys and you stay with me.

That started like me saying I was going to delay Fiona further.

Not the case. But bear with me while I ladysplain.

Yesterday, a blogging pair emailed me to let me know they couldn't find Kick on Amazon. Weird, since it's been on there since June 2014 and the only change I made was making it 99c on Sunday.

It showed up for me fine, but I went to salesrankexpress.com and checked anyway.

Guess what? The books have been flagged as ADULT. 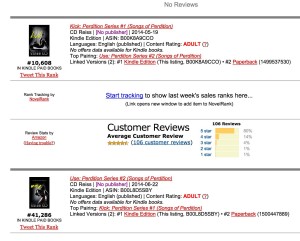 Forgive the resolution. If you want to see how it works, click the pic and you'll go to the salesrankexpress page.

For those of you who don't know, I'll spend this paragraph explaining what that means. (if you know about ADULT tags already, you can skim-n-skip)

ADULT means the titles are suppressed. So they won't show up in also-boughts, recommendations, or in searches for people who haven't visited the pages before. There will be a little link on top that says “show hidden titles,” and if you click it, the book will come up now and forever. But no one's looking for a damned link at the top and even then, it doesn't matter. See next paragraph.

The upshot was I started pimping a 99c sale on Monday and sold 30 books. That's ridonkulous. Truly, it is about what I sell with direct pimp links. But the real sales are in the increased visibility those 30 buys creates. So there should have been something like 120 or more sales.

I was upset for exactly three minutes. Then I thought this might be my own fault. The covers are very, very kinky. She's in shadow but she's naked, and she's in a suspension. 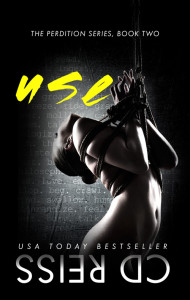 What was I thinking? I dunno. But if you like the cover, the paperbacks will keep these covers until I get bored of them or another issue arises.

Earth to Christine. Do you want your kids to randomly search things and find this on their results? No, you do not. And it's not like I started writing erotica yesterday. It's not like I haven't seen this happen to people before.

I know how to fix it. Change cover and blurb, then grovel. Because of the holiday it would take a week or more to get it done. It may never get fixed. One book might get fixed and not the other. And releasing Break on Dec 1st was going to be a wasted effort if no one could see the first two books….but the most likely scenario was that Break was going to get flagged with the rest.

I think doing this for five years already makes me relaxed about the possibility that the last book in a series, a long book I tortured myself over, might sink like a stone and never be heard from again. It won't be the first or last. Having resigned myself to the worst case scenario, I got to work.

I tossed around a lot of possibilities, and discussed a germ of an idea with a dear writer friend. We came up with not just a solution, but a way to breathe new life into the series, get the book out in time, find new readers, satisfy fans and put a safe cover on it.

I've already removed Kick and Use from the other venues. They didn't sell anyway. I sold 3 Kick a week on iBooks and Nook. That's not a loss. If you missed them, I'm sorry, but they've been there a long time. I'd check iBooks. I think they're still there for now.

I'm not going to make any big statements about what I love and hate about KU. I don't even care about my own crankiness with it. What I care about is reaching people, sharing my ideas, and showing off my metaphors. Also money. I care about money. I know it's aggravating to people who use other platforms. Fuck Amazon for innovating the page count thing and making it profitable to do full-length books.

An Apple rep told me he thought exclusivity was bad for consumers. He may be right. But as far as I'm concerned, Apple's going to have to figure out how to lure me and a few hundred thousand readers back. I look forward to it.

If you use other platforms, I STRONGLY suggest you get on this email list and make sure you put me in your contacts (xtine@flipcitybooks.com) so I can tell you when I upload Break.

Also, though I have no intention of putting any frontlist in KU going forward, I don't know what the future holds. Get on the mailing list so if I put something up on other platforms for a limited time, you can grab it.

Did you want to see the cover for the standalone?

Ellie McLove from Love N Books hooked me up with Franggy Yanez's photo within hours of me saying I had an emergency cover request. 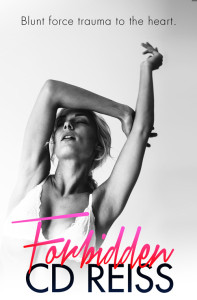 I have the classiest fans in publishing, but if the comments get nasty I'm shutting them.